Wild Gunman[a] is a light gun shooter game created by Nintendo. Originally created as an electro-mechanical arcade game in 1974 by Gunpei Yokoi, it was adapted to a video game format on an arcade cabinet and light gun. It was released in 1985 as a launch game for the Nintendo Entertainment System with the Zapper light gun.

Original version
The original version of Wild Gunman is one of Nintendo's electro-mechanical arcade games created by Gunpei Yokoi and released in 1974. It consists of a light gun connected to a 16 mm projection screen. Full-motion video footage of an American Wild West gunslinger is projected onto the screen. When this enemy character's eyes flash, the player draws and fires the gun. If the player is fast enough, the projection changes to that of the shot gunman falling down; otherwise it shows the gunman drawing and firing his gun. A victorious player faces off against several more gunslinger opponents.[1] This version of Wild Gunman was released in North America by Sega in 1976.[2]

The second version has a plastic gunman figure mounted on top of a plastic battery box called Custom Gunman, which later became one of the microgames in the Game Boy Advance title, WarioWare, Inc.: Mega Microgames!. 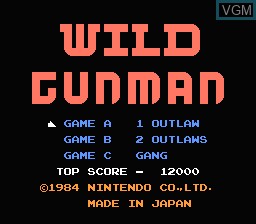 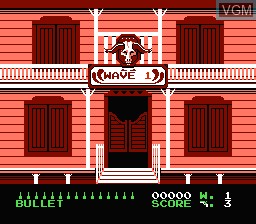 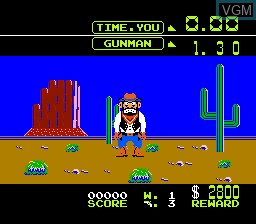 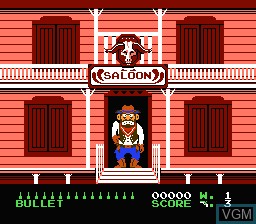