Do you have what it takes to save the Mushroom Princess? You’ll have to think fast and move even faster to complete this quest! The Mushroom Princess is being held captive by the evil Koopa tribe of turtles. It’s up to you to rescue her from the clutches of the Koopa King before time runs out. But it won’t be easy. To get to the Princess, you’ll have to climb mountains, cross seas, avoid bottomless pits, fight off turtle soldiers and a host of black magic traps that only a Koopa King can devise. It’s another non-stop adventure from the Super Mario Bros.!
. 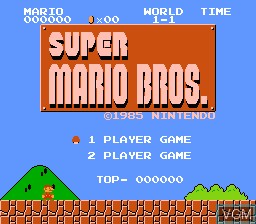 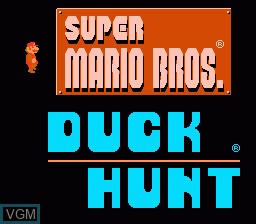 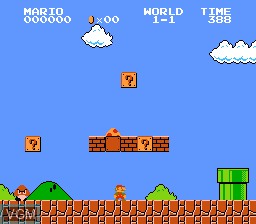 From Wikipedia, the free encyclopedia
Super Mario Bros.[b] is a platform game developed and published by Nintendo. The successor to the 1983 arcade game, Mario Bros., and the first in the Super Mario series of platformers, it was released in Japan in 1985 for the Famicom, and in North America and Europe for the Nintendo Entertainment System (NES) in 1985 and 1987 respectively. Players control Mario, or his brother Luigi in the multiplayer mode, as they travel the Mushroom Kingdom to rescue Princess Toadstool from Bowser (King Koopa). They must traverse side-scrolling stages while avoiding hazards such as enemies and pits with the aid of power-ups such as the Super Mushroom, Fire Flower, and Starman.

The game was designed by Shigeru Miyamoto and Takashi Tezuka as "a grand culmination" of the Famicom team's three years of game mechanics and programming. The design of the first level, World 1-1, serves as a tutorial for first-time video gamers on the basic mechanics of platform gameplay. The aggressively size-optimized profile was intended as a farewell to the Famicom's cartridge medium in favor of the forthcoming Famicom Disk System, whose floppy disks temporarily became the dominant distribution medium for a few years.

Super Mario Bros. is frequently cited as one of the greatest video games of all time, with praise on its precise controls. It is one of the bestselling games of all time, with more than 40 million physical copies. It is credited alongside the NES as one of the key factors in reviving the video game industry after the 1983 crash, and helped popularize the side-scrolling platform game genre. Koji Kondo's soundtrack is one of the earliest and most popular in video games, making music into a centerpiece of game design. The game began a multimedia franchise including a long-running game series, an animated television series, and a feature film. It has been rereleased on most Nintendo systems. Alongside Mario himself, Super Mario Bros. has become prominent in popular culture.

From Wikipedia, the free encyclopedia
Duck Hunt[a] is a 1984 light gun shooter video game developed and published by Nintendo for the Nintendo Entertainment System (NES) video game console. The game was first released in Japan in April 1984 and was released as a launch game for the NES in North America in October 1985, with it also releasing in Europe two years later.

In Duck Hunt, players use the NES Zapper in combination with a CRT television to shoot ducks that appear on the screen.[4] The ducks appear one or two at a time, and the player is given three shots to shoot them down. The player receives points upon shooting each duck. If the player shoots the required number of ducks in a single round, the player will advance to the next round; otherwise, the player will receive a game over.

The game initially received few reviews but was given mild critical praise.[5][6] Prior to the NES version, Nintendo also made a Duck Hunt game based on Laser Clay Shooting System released in 1976.[7]

Beginning with the nationwide roll-out of the NES in 1986, Duck Hunt was one of several titles Nintendo included as a pack-in game with some of its releases. The initial Deluxe Set included Duck Hunt and Gyromite. The later Action Set was packaged with Duck Hunt and Super Mario Bros., which was the pack-in for an upgraded Basic Set; unlike with those releases, Nintendo opted to place both games on one cartridge as opposed to having separate individual cartridges. The last NES release to include Duck Hunt as a pack-in was the Power Set, which came with the Power Pad; for that particular release, the multicart added World Class Track Meet as a third selectable game with Duck Hunt and Super Mario Bros. The game was released as a Virtual Console title for the Wii U in 2014.[8]